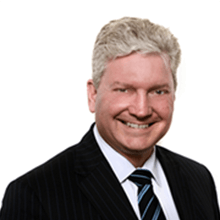 Michael C. Doyen is a skilled litigator with over twenty-nine (29) years of experience trying civil and criminal cases. He has tried over forty (40) jury trials to verdict and has tried hundreds of non-jury cases. Mr. Doyen has concentrated his practice in the area of family law for over twenty-five (25) years.

Mr. Doyen was born in Springfield, Missouri and was raised in the St. Louis area. After graduating from the University of Notre Dame in 1983, where he also received a Regular Army Commission as a Second Lieutenant in the U.S. Army, he sought a deferral of active duty military service to attend law school at St. Louis University School of Law. Mr. Doyen graduated from law school cum laude in 1986 and entered into active military duty in the Army Judge Advocate General’s Corps stationed at Ft. Belvoir, Virginia. Mr. Doyen attained the rank of Captain and served as Chief of Military Justice. In addition to his duties prosecuting military personnel by Courts-Martial, he also served as a Special Assistant United States Attorney for the Eastern District of Virginia, Northern Division, prosecuting cases in the United States District Court. In 1990 Mr. Doyen returned to his wife’s hometown of Elgin, Illinois and entered into private practice with his Father-in-Law, Robert A. Chapski where he practiced from 1990 until 2015. In 2016, as his daughter Kathleen and son Christopher reached the age at which time Mr. Doyen returned to Illinois, the family founded The Doyen Law Group, LLC.

While Mr. Doyen has extensive trial experience, the majority of the cases he handles are resolved by settlement. He appreciates that most clients want their cases resolved amicably and efficiently. His experience with the full range of family law issues enables him to navigate complex cases towards the resolution most favorable to his clients. These results are usually achieved by settlement, but when necessary he is prepared to zealously present his clients’ cases at trial.

Mr. Doyen is available for consultation during regular business hours, but will also schedule appointments for evenings and Saturdays to accommodate his clients.