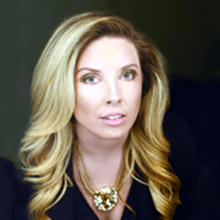 Kathleen Doyen became licensed to practice in Illinois and the state of New York in May of 2011. She began her legal career with the Kane County State’s Attorney’s Office where she practiced in traffic and misdemeanor, juvenile delinquency, domestic violence, DUI and general felony courtrooms. While with the State’s Attorney’s Office Kathleen represented the People of Illinois in over one hundred bench trials as well as numerous jury trials.

Kathleen received her B.A. in Broadcasting and English from Marquette University in 2007. While there, she was the first President of Sigma Kappa Sorority’s Marquette Chapter.

Upon graduation, Kathleen received an academic scholarship to attend Saint Louis University School of Law and graduated in 2010 with concentrations in International and Health Care Law.

Having grown up in Elgin, and graduating from St. Edward Central Catholic High School, Kathleen takes pride in her ability to serve the community both through charitable efforts and the practice of law.